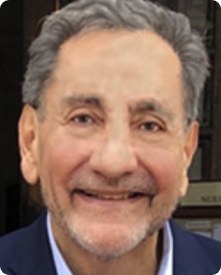 Dr. Nicolas Bazan is the Boyd Professor and Director of the Neuroscience Center of Excellence and leads a group of more than 80 scientists at the LSUHSC School of Medicine’s Neuroscience Center and has a strong interest in nociception and pain. His research is focused on understanding cellular and molecular mechanisms to prevent and cure neurodegenerative diseases. He has consulted with pharma on the development of various neurological drugs and was the co-founder of an ophthalmic company that went public in the 1990s. His laboratory has performed all of the analgesia in vivo animal models, LC-MS/MS-based metabolomic analysis for NAPQI, MALDI molecular imaging; cell cultures, and spatial single-cell transcriptomics level studies. He is the current PI of three NIH grants. His M.D. was earned in Argentina, followed by post-doctoral training in Columbia and Harvard Universities and the University of Toronto.

BACK TO LEADERSHIP TEAM